Who doesn’t know Camp Nou, the home stadium of FC Barcelona? Everyone does.

However, there are some Camp Nou facts which not all know.

For decades rival teams have arrived at Camp Nou only to lose their matches and go back home.

That is the magic of FC Barcelona, one of the most popular outfits in European football.

After all little genius Lionel Messi plays for them!

This Spanish football club and it’s home stadium is so popular that there is a Camp Nou Experience tour built around it.

If you love FC Barcelona or Barca as its also known as you may want to try this self-guided tour of the Camp Nou stadium and its Museum.

You can walk through the museum, the trophy room, the changing room used by the players, the press room, the VIP stands, and of course the Camp Nou stadium.

This stadium is, in fact, a new stadium built to replace the first stadium called the ‘Les Corts’ which had become too small to seat the Barcelona fans.

Legendary Spanish footballer Ladislao Kubala was the reason why Camp Nou had to be built.

When the crowd to watch him play kept on growing, Les Corts just couldn’t accommodate all the fans.

The club tried to extend Les Corts many times but after the capacity reached 60,000 they had to plan a new stadium.

3. Camp Nou is the largest stadium in Europe

Seat capacity wise, Camp Nou is still (in 2019) the largest stadium in Europe.

With a 98,000 seat capacity, this stadium is indeed a spectacle in its own rights.

The Camp Nou Experience tour will let you enjoy the view of this colossal stadium from the player’s dugouts and the press box (this facility is unavailable on the match days).

Camp Nou was inaugurated on 24th of September, 1957 coinciding the date with the very popular Catalan festival known as the festival of Mercé.

Since then this stadium and the club has become an integral part of Catalan culture and identity.

No surprise in this Camp Nou fact.

The first game played in this stadium was comfortably won by team Barcelona, against a Warsaw Select XI by a margin of 4 goals to 2.

Later that year Camp Nou hosted its first official match against Real Jaén and the home team won by a huge margin of 6 goals to 1.

It isn’t just FC Barcelona which has made Camp Nou its hunting ground.

The Spanish football team beat Poland 3-2 in the final of the Olympics football tournament to win their only Olympic Gold so far.

Save money on your travel within Barcelona city. For free rides on public transport, get Hola BCN card

The huge roof of the Camp Nou stadium prevents the sun rays from reaching the grass and that is why it requires constant care and change.

However, in 2016 they moved to hybrid grass – which combines natural grass with synthetic fibers to provide optimum stability.

Here is a time lapse video of how the Stadium’s grass is laid out:

8. All the trophies won can be seen by the fans

It is true that fans of Barcelona FC can see all the trophies won by the football club over the years.

All you have to do is book the Camp Nou Experience tour.

The Golden Boots and Ballon D’ors won by Messi are also available for the fans to see.

Legend has it that during the matches in Barca’s first stadium Les Corts, the outsiders could see only the backsides of the spectators in the top-most tier.

With only their backsides visible, they named the Barca fans ‘Cules’ meaning ‘Asses.’

The motto of the club “Mes que un Club” translates to ‘More than a Club’ and over the years it has become a symbol of Catalan nationalism.

Just to bring you up to speed, Catalonia wants to break away from rest of Spain and form its own country.

However, Spain doesn’t want this to happen.

That’s why even waving of the Catalan flag is considered a sign of protest and is banned.

The club arena is one of the rare places in entire Spain where Catalan can be freely spoken and Catalan flag can be waved at will.

The 1982 Football World Cup was held in Spain.

Camp Nou was one of the stadiums where the matches were scheduled.

After the World Cup was over, thanks to restrictions imposed by UEFA the capacity had to be reduced to 98,000.

Even though Camp Nou is 48 meters high, 250 meters long and 220 meters wide and can seat 98 thousand people, it can be evacuated in five minutes.

That’s why this massive stadium has been given a 5-star safety rating.

Dutch-born Johann Cruyff – one of the most famous Barca players and managers triggered the Tiki-Taka style of play.

After him, the managers who followed him carried on the style which would eventually result in Spain winning the World Cup in 2010.

This whole tiki-taka philosophy of football was thought of and mastered at Camp Nou.

Believe it or not, the great Spanish artist Miro was an FC Barcelona fan along with many other Spanish legends.

However, the reason Miro deserves a mention in this list of Camp Nou facts is because of a wonderful lithograph which is displayed at the club.

The painting is bound to catch the attention of all art-lovers going on the Camp Nou Experience tour.

15. Camp Nou is getting bigger

While camp Nou is the biggest stadium in Europe, when it comes to world rankings it is behind Maracanã Stadium in Rio de Janeiro, Brazil.

Since the Maracana stadium can seat 120,000 spectators Camp Nou is planning a 300 Million Euros upgrade which will increase their capacity to 130,000 spectators.

This will make Camp Nou the largest football stadium in the World.

16. Camp Nou is owned by its members

Did you know that FC Barcelona is one of the few clubs in the world which is owned by its members?

This means, Camp Nou isn’t owned by a trust or an organization – it is owned by a group of individuals.

Even though Barcelona is the world’s second most valuable football club, its home games don’t draw much local attention.

The matches at Camp Nou excite only a few of the locals and most prefer to watch them in Clubs and pubs.

Most of the spectators who come in to watch football matches in Camp Nou are tourists visiting Barcelona.

Because of the high demand from tourists, the ticket prices have gone up beyond the reach of most of the local population.

If you book this ticket online, you save 2.5 Euros per ticket because you don’t pay a ticket handling charge. The ticket will be emailed to you. 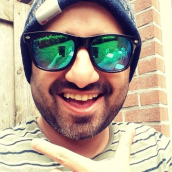 He is an active adventurer who loves to push himself physically and mentally while exploring the world. His travels are usually to natural environments or remote locations which include active physical activities and experiences he has never tried before. He loves backpacking and independent traveling with a low budget. Favorite Cities: Reykjavik, Kathmandu, Hanoi, Phnom Penh, Capri