What to pack for Cancun, Mexico – packing list for beach holiday

We don’t think the Crown access ticket is what it is made out to be.

Before we share our reasons why Crown tickets aren’t worth all the trouble, let’s take a quick look at the three ticket options you have and how far you can go with them.

All these tickets come with transportation from Battery Park (in New York) or Liberty State Park (in New Jersey) to the Liberty Island, where the Statue of Liberty stands.

These tickets also include access to the Immigration Museum in Ellis Island and a ferry back to either Battery Park or Liberty State Park.

If you only want to climb the Liberty’s Crown check out some tips for last minute Statue of Liberty Crown tickets.

Are Crown Reserve tickets worth it?

Here are the six reasons why we think the Statue of Liberty Crown tickets are not worth all the trouble one has to go through.

1. Only 0.4% of the tickets sold are Crown Tickets

For safety reasons, no more than 10 people can visit the Statue of Liberty’s Crown at a time and around 6 groups can visit the Crown per hour.

This means, approximately 500 people climb up to the Statue of Liberty’s Crown every day. That is, around 180,000 Crown tickets are sold annually.

Crown tickets get sold out soon

As a result, the Crown tickets get sold out soon.

Visitors need to book their Statue of Liberty Crown tickets so much in advance, that they have to change their travel plans to accommodate the availability of Crown tickets.

We agree it is an exclusive experience but is it worth changing your plans for?

We feel this is unnecessary.

If you really want to go up to the Crown of Statue of Liberty to soak in the views of the amazing city that New York is, we recommend Top of the Rock, One World Observatory or Empire State Building instead.

2. Statue of Liberty was built to be admired from the outside

Statue of Liberty is huge and that’s its selling point.

The grandeur of this statue (or any statue!) is from the outside.

You get some of the best of views of the Statue of Liberty when you are ferried to the Liberty Island.

Once on the island, a nice leisurely walk around Liberty Island helps you see the Lady with the Torch from all sides.

3. Climbing up Lady Liberty can be difficult

You can’t take a lift to Statue of Liberty’s Crown.

You must walk up 354 steps which is equivalent to 20 stories.

The Statue of Liberty crown tickets is recommended only for people in good physical health.

Besides, during the peak season which is the summers the inside of the Statue is much warmer than then outside because there is no climate control.

Official figures put the inside temperature at about 20°F (11°C) higher than outside.

Visiting attractions during holidays must be fun, they mustn’t be torturous.

That’s why we recommend a more leisurely Reserve ticket, which is also known as a Ground access ticket (link below).

4. “There is nothing to see in Statue of Liberty’s crown”

One of the best parts about climbing the 350+ stairs to reach Statue of Liberty’s Crown is that during the climb you can see the interior of the statue. But that’s about it.

For the Crown at the top of the Statue is a cramped space – and that’s why only 10 tourists are sent up at a time.

Once you are at the top, you will notice 25 small windows to look out of. Unfortunately, these windows aren’t good spots to take photographs.

Check out the short video below to know what to expect –

Most visitors spend only a few minutes before they start climbing down the stairs.

Many tourists who have been up to the Crown are known to have said, ‘There is nothing up there!”

5. You may miss Immigration Museum in Ellis Island

Depending on the month of the year, your visit to the Statue’s Crown and back can take anywhere from 3.5 hours to 5 hours.

Since for Crown Reserve tickets, you can’t use ticket printouts from home you must collect your tickets at the ticket offices in Liberty State Park (NJ) or Battery Park (NY).

These tickets can be picked up only by the purchaser themselves.

Then you must stand in the line for the primary security check to board the ferry.

Once you clear the primary security check, you take a 15-minute ferry to Liberty Island.

Since Crown tickets are timed, you will have to wait for your slot to arrive and then line up for the secondary security check.

This check could also take upwards of 15-20 minutes depending on how many are ahead of you.

Once all is clear, you start climbing the 350+ stairs which can take anywhere from 20 to 30 minutes depending on how healthy you are and how many are ahead of you.

After you spend ten minutes in the Crown, you take about 15 minutes to walk down.

How can you be done with the Liberty island without seeing the Statue of Liberty from all sides?

So, you lose an hour there.

Then you wait in the queue for the 15-minute ferry which will take you to Ellis Island, which hosts the Immigration Museum.

The wait for the ferry will depend on the time of the day, and day of the week.

Because of all this, there is a high chance that you may miss seeing the Immigration Museum in Ellis Island.

At Ellis Island National Museum of Immigration, you get to see the passenger records of the ships that landed more than 65 million immigrants at the Port of New York and Ellis Island from 1820 to 1957.

We think the Immigration Museum is the far more important attraction than the Statue of Liberty’s Crown.

That’s why we feel from an effort and return perspective the Reserve Ticket is a much better option then the Crown Reserve tickets.

# One World Observatory
# Top of the Rock
# Chicago Skydeck
# 360 Chicago 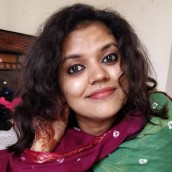 She is a holidaymaker comfortable with vacations on sandy beaches or breaks where she is skiing in the snow. She mixes up her holidays with the right amount of activity and lazing around and believes that both are needed in the right amount to experience the world’s cultures and destinations. Favorite Cities: Prague, Budapest, Munich, Florence