Tips for traveling by road with family and kids

Located just outside the walls of Alhambra, the Nasir Sultans used Generalife as a Summer Palace where they could retreat with their families to escape the turmoils of the Alhambra Palace.

Visitors feel Generalife is the most charming corner of the Alhambra, thanks to its gardens and fast-flowing water.

It is composed of a series of extensive gardens, and minimalistic buildings, both of which integrated so well that one doesn’t realize where the gardens begin and where the buildings end.

In this article, we share everything you must know before booking your Generalife tickets.

In 1984, both Alhambra and the Generalife (also known as Jardines del Generalife) were named World Heritage sites, for being the most important legacies of Moorish architecture and design in Spain.

How to reach Generalife

Alhambra Castle is 2.5 Kms (1.5 Miles) from the center of Granada City.

Generalife is outside the walls of Alhambra and is located on the slopes of Cerro del Sol (Hill of the Sun), offering stunning views over the city and the rivers Genil and Darro.

If you are in and around the city of Granada, board any of these buses:

Bus No. 30 and 32 have the following stops in the Alhambra complex:

You can also take an Uber from Granada city to get to Generalife.

Both Alhambra and Generalife have the same parking space, which has around 500 slots.

This parking area has four zones – the first zone you see when you enter is earmarked for buses and caravans.

It is best to park in the last zone because that’s closest to the Entrance Pavillion, which is nearest to the entrance of the Generalife. Get Directions

1. Gate of the Carts

It is also known as Puerta de los Carros.

Since Gate of the Carts is right in the middle, near the Tower of the Heads (Torre de las Cabezas), this gets used most often.

It is also closest to the Nasrid Palaces entry and the Charles V Palace. Directions

In Spanish, it gets referred to as Puerta de la Justicia.

If you plan to explore the whole of Alhambra Castle, Gate of Justice is a better (and grander entrance).

It is also known as the Gate of the Esplanade. Directions

This gate is situated right next to the Ticket Office, and it is closest to Generalife.

These are also the timings followed by the Alhambra Castle.

From Tuesday to Saturday, the Generalife Gardens follow these timings:

On Sundays and Mondays, the night visits aren’t allowed.

Alhambra Gardens are not open for night visits from 1 Jun to 31 Aug and from 15 Nov to 31 Mar.

The last entry to all areas of Generalife is one hour before closing time.

All visitors inside Generalife Gardens are requested to leave at the closing time.

When is Generalife closed?

Generalife in Alhambra remains closed on two days a year – 25 December and 1 January.

It is best to visit Generalife as soon as they open at 8.30 am. If you can’t make it that early, try to be in the garden complex by 10 am, at least.

When you start early, the crowd hasn’t come in yet, and the gardens are fresh and smelling of the morning air.

That’s why Generalife’s morning tickets sell out quicker than the afternoon tickets.

Spring is a wonderful time to see the Generalife gardens in their full flory.

How long does Generalife take?

If you plan to visit only Generalife, you will need a minimum of 45 minutes and a maximum of 90 minutes to explore the attraction.

If the other areas of Alhambra Castle, such as the Nasrid Palaces and Alcazaba, are also on your itinerary, you will need at least four to five hours.

There are many ways to experience Generalife.

You can visit only the Generalife Gardens or the other parts of the Alhambra Palace as well.

If you want, you can even add Albaicín neighborhood to your tour of Palacio de Generalife.

You can explore this attraction all by yourself, or opt for an official guide, which makes it all the more fun with anecdotes and stories.

You can explore Generalife during the day or after lights are out.

The options are plenty, and we list them below –

This is a highly rated General Alhambra ticket which gives you Skip the Line access to all areas of the attraction.

Besides Generalife, during this tour a local guide also takes you through Alcazaba (the defence fortress), and Nasrid Palaces.

Meeting point: Polinario Café Bar next to the Alhambra ticket office. Look for a guide wearing GetYourGuide attire and holding a red GetYourGuide flag standing by the entrance of the cafe. Get Directions

2. Self-guided tour of Alhambra and Generalife

This self-guided Alhambra general ticket gets you to access all parts of the Alhambra Castle.

Besides Generalife, you also get to walk around Nasrid Palaces, Alcazaba, Gardens, Charles V Palace, etc. at your own pace.

This ticket comes with an audio guide that you can pick up either at the Entrance Pavilion or the Palace of Charles V.

Tickets price (with hotel pick up)

*If you love VIP treatment, this private tour is a perfect way to explore Generalife and the rest of Alhambra Castle.

These tickets are also known as the ‘Alhambra gardens tickets’ or the ‘Alhambra and Generalife tickets’ because you get to access all gardens in the complex.

This ticket gets you access to Generalife and Alcazaba but not to Nasrid Palaces.

This guided tour starts at 10 am when you enter Alhambra Palace.

After the guide has taken you through all major attractions within the complex, including Generalife Palace and Gardens, you stop for lunch.

Walking along the narrow, cobbled streets of Albaicín and admiring the flowering balconies and stunning views of the Moorish fortress are memories that are sure to stay with you forever.

Meeting Point: At the Mural map, near the main entrance of the Alhambra, by the ticket office. The guide will be holding a white umbrella. Get Directions

*If you want a private tour of Generalife, Nasrid Palaces, and Albaicín neighborhood, check this out.

You must try the Generalife at night only if you have seen it once during the day or if you have no other option – no tickets or no time.

Many tourists feel the night time experience at the Generalife is below par. Here are some of the reasons they cited –

The night tour of Generalife starts from the Entrance Pavilion near the ticket counters. All other entrances are closed at night.

During this two-hour guided tour, you get to explore some parts of Alhambra Fortress and gardens and the Palace of Generalife at night.

You also visit the Palace of Carlos V, and the Puerta de la Justicia but Nasrid Palaces and Alcazaba are not part of this tour.

The highlight of this tour is the panoramic views of an illuminated Granada, which you get to see.

What to see at Generalife?

Generalife got designed as a summer palace of the Nasrid rulers to offer them calm and peace from their busy schedules.

And that’s exactly what all visitors also experience during their visit.

This medieval garden retreat of the Sultans is the most beautiful part of the Alhambra Castle.

The Generalife Palace got built in the 13th century.

In its current state, the Generalife has two groups of buildings connected by the Patio of the Irrigation Ditch (Patio de la Acequia).

Entrance to the Generalife Palace is through a tiny door, partially hidden by undergrowth, and a narrow stairway will take you to the residences and rooms.

The New Garden links Generalife to the rest of the Alhambra.

Landscaped gardens got added to the area between the Alhambra and the Generalife Palace.

It is also known as Jardines Nuevos or Low Gardens.

Back in the days, Generalife had three entrances – one from the Alhambra, which was used by the Sultan and his entourage, the second from near the Entrance Pavilion, and the third through Postigo de the Rams.

Access is today through the so-called New Gardens, which is also referred to as Patio de Acceso.

4. Patio of the Irrigation ditch

This exhibit at Generalife also gets referred to as the Court of the Water Channel (or Patio de la Acequia).

A channel that carries the water from the irrigation ditch of the Alhambra divides the patio lengthways.

5. Court of the Sultana

This area is also known as Patio del Ciprés de la Sultana, and it is here that you will find Court of the Sultana’s Cypress tree.

According to a legend, Boabdil’s wife used to meet a knight of the Abencerrajes family under this Cypress, and when the King found out, he had the Knight’s whole tribe killed.

The Water Stairway is both beautiful and original – it is the oldest staircase in Generalife gardens because it existed in the Muslim period.

The handrails of the staircase are channels for running water (see pic above).

These stairs are divided into three flights, each with a fountain.

A stone step leads visitors to Generalife’s Upper Gardens, which back then used to be olive groves.

Today, there is a big esplanade and modern gardens with rose bushes and jasmines spreading their fragrance all around.

The Walk of the Oleanders is a long path along the upper section of the wall dividing the gardens, which is fully covered by an arch of Oleanders.

This romantic access to the Generalife Palace got built in the mid 19th century.

It is also known as Patio del Descabalgamiento, and it is believed that this area got used for mounting and dismounting from horses. Image: WalkLabyrinth

This spot is a simple walled enclosure, with arched niches where guards could have stood when Generalife was in use by the Sultans.

There is a small central fountain basin in the middle of the enclosure. 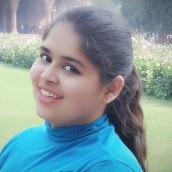 She loves to visit the popular holiday destinations because they are easy to explore as a tourist. She also loves to plan much and fix an itinerary before stepping out of her hotel room. For her, people and the cuisine in a holiday destination are more critical than Museums and monuments. Favorite Cities: Kuala Lumpur, Hong Kong, Singapore, London